"One must teach in two languages, affirm the cultural values of both home and school, teach standardized forms of the two languages but respect and affirm the multiple varieties and dialects represented among students in class, be a creative and flexible teacher, serve as a catalyst for discovery as students learn to operate effectively in their multiple worlds, be able to mediate and resolve intercultural conflicts, keep students on task and on and on."
- Virginia Collier

This simply means that teachers have to teach the rules and codes of power (Delpit) while respecting the students' first language and culture!

"One must teach in two languages, affirm the cultural
values of both home and school, teach standardized forms of the two languages
but respect and affirm the multiple varieties and dialects represented among
students in class..."

What Virginia Collier is describing is a new form of teaching; different from what is in place now, that allows the student to learn their second language, while preserving their first language. This is done by allowing the child's first language to be used in order to understand their second language. While helping a English Language Learner, as a student teacher, I was able to mirror this model simply by using Spanish words to help the child better grasp his English alphabet. One simple inclusion made an impact on this child's learning for the better, and that all that a teacher wants, right?

Collier According to lauren

"One child who came to know this person was eager to find out about many things. Together they discovered the intimate secrets of time and
space and nature and the way things work. They played with language. They both grew in wisdom and they learned how infinite and mysterious knowledge is... "


Number Two: Do not think of yourself as a remedial teacher expected to correct so-called “deficiencies” of
your students.

“Instead,
whether in English, Korean, Spanish, Greek, or Portuguese, you are working to
develop the child's language as an effective instrument of intellectual
growth.” -Virginia Collier

Whether the child recites a lesson
in the English language or in their native tongue it is important for them to
understand the material in the way they are most comfortable in order for them
to successfully grow in their education.

While reviewing what numbers “look”
like with my kindergarten class I drew on a dry erase board the number, five,
and asked my students what number this was. In response I received a collection
of, “five!” followed by one student who called out, ‘cinco!” I paused for a
second to think about how I was going to respond to that. Surely, “cinco” was
not the wrong answer however, in school we use English was I supposed to correct
the student or encourage them for saying the right answer? I thought back to
Collier and what Collier would say and I remembered the quote that no matter
what language is being used, we as teachers are helping to develop a child’s
education using their language as an effect way to help them learn. So instead
of correcting the student I simply responded with, “That’s right.” Out of
curiosity I went around my small group and asked each child what language they
spoke at home. All of them responded with “Spanish” so I asked them what
language do we speak at school? They responded with “English” so I asked them
why and one very brave and bold student answered, “Because not everyone speaks
Spanish so we speak English in case they don’t understand what we are saying.”
So I left it at that and continued
my lesson.

"The natural phenomenon of code-switching should not be forbidden." 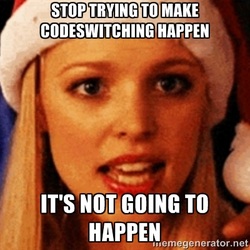 Why code-switching is important?

Alex's Story:
I'll never forget the moment this situation happened. I was absolutely taken aback by the young girl's comment that "boys should only speak spanish when talking to girls." Now I don't know where she got that idea maybe a secret education from television or maybe that's what she hears at home. But the major issue with that statement is that she was trying to prohibit the young boy from code switching. It was obvious that he had switched from English to Spanish because he was trying to work through the problem. At this moment I had a choice. I had a choice whether to sit there and let the comment slide or say something. I decided to say something to reassure the young boy that it was alright to speak spanish and whenever he found it necessary to do so, he was allowed to do so. I'm glad I did say something to him because he could've never wanted to volunteer sort of what we read about in the article Aria where the author Richard Rodriguez talked about learning English and how he stayed silent because he didn't feel as if he knew what he was talking about. This is exactly why Collier says it's important to allow code-switching. Collier also states that when they code switch, it's not indicative of them not knowing how to solve problem. It could potentially be them trying to solve a problem.

Collier according to julia

“First-Language influence might affect a student’s pronunciation or word order in the second language.” (Pg. 229)

Teachers need to embrace a student’s language even when it isn’t English. In my service learning I noticed that the teacher was regularly correcting the bilingual student’s pronunciation of words and letters. Collier believes that bilingual student’s first language will impact an individual’s pronunciation of second language letters, sounds, and words. As seen in the classroom I worked in the bilingual student began to retract from answering questions as often. Collier believes that this is because the student feels as if his language isn’t respected and he will be wrong because he is constantly corrected. 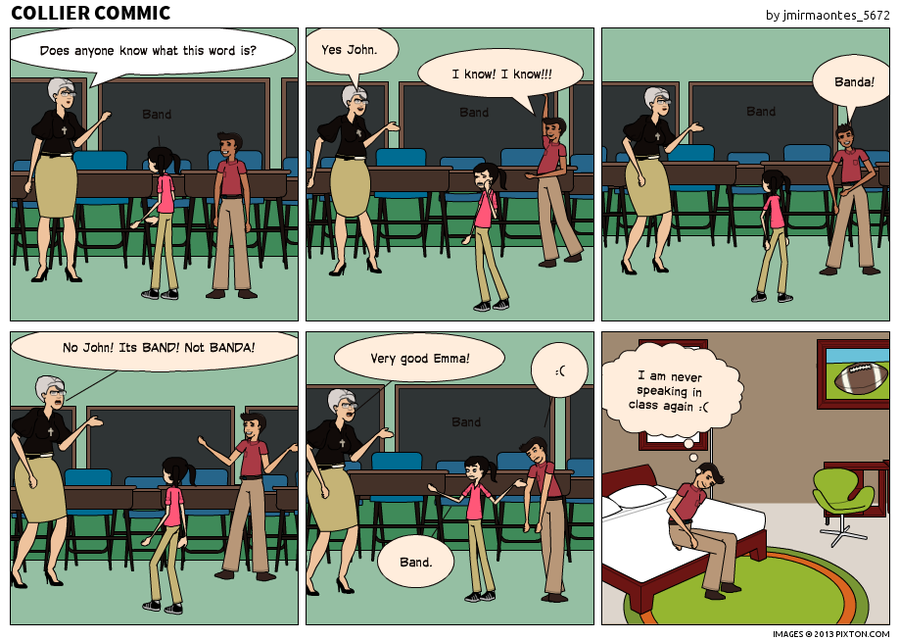